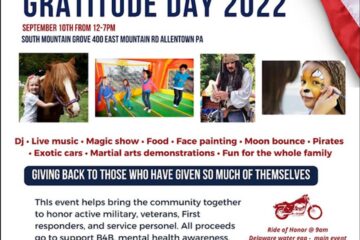 By Rich Hudzinski, 2 months ago

The new, easy to remember number to reach the Veterans Crisis Line starts Saturday, July 16.  Just dial 988 and press 1. Please help spread the word to all military veterans and their friends and families.     The number is new, but the support is the same.  Part of the Read more…

By Rich Hudzinski, 3 months ago

From the Lehigh County Director of Veterans Affairs:  “See attached flyer [click on the image to the right] for the upcoming Mental Health First Aid training on April 6. You can register using the attached or visit the website listed on the flyer. There is no cost for the training … END_OF_DOCUMENT_TOKEN_TO_BE_REPLACED

LVMAC Tidbit: The Latest on the Veterans Suicide Issue

The following is an excerpt from the minutes of the monthly VISN-4 veterans service organizations’ conference call in November.  It addresses the issue of suicides among veterans:

In September, VA released national and state-level findings from its most recent analysis of Veteran suicide data, from 2005 to 2016. The analysis is part of VA’s ongoing examination of non-Veteran and Veteran death records that is being used to evaluate and improve VA’s Suicide Prevention Program. END_OF_DOCUMENT_TOKEN_TO_BE_REPLACED

The U.S. Department of Veterans Affair’s (VA’s) S.A.V.E suicide prevention training is now available online from its collaborators at PsychArmor!

Training is available 24/7 to help you identify and support veterans at risk. END_OF_DOCUMENT_TOKEN_TO_BE_REPLACED

On 27 June 2017,  the  VA released its final plans laying the framework for providing emergency mental health coverage to former service members with Other-Than-Honorable (OTH) administrative discharges.  For the older generations of veterans, the characterization of service was termed Undesirable.

Effective July 5, all Veterans Health Administration (VHA) medical centers are to offer emergency stabilization care for former service members who present at the facility with an emergent mental health need. Under this initiative, former service members with an OTH administrative discharge may receive care for their mental health emergency for an initial period of up to 90 days, which can include inpatient, residential or outpatient care. END_OF_DOCUMENT_TOKEN_TO_BE_REPLACED

Forward Observer — Resolving the Suicide Issue: The Obvious Brings Its Own Complications

Veterans At Risk Of Suicide Negotiate A Thorny Relationship With Guns, NPR Reports

Two key points are raised in the article which follows that affect the results, and work against what would seem to be common sense:

1) There is a question as to if the VA is really following a due or, at least, a fair process.  We know of a veteran who was not properly informed of the proceedings against him.  In addition, the VA, according to this article, is probably violating his/her Second Amendment rights, while trying to do the right thing.

2) Fear of being branded as mentally incompetent, may cause affected veterans not to access the benefits they’ve earned, including access to health care for conditions related to their military service.  When a veteran is most fragile, he/she may be effectively driven away.  Why is the term “mental incompetence” used in all instances in the first place? END_OF_DOCUMENT_TOKEN_TO_BE_REPLACED

No comments to show.